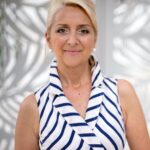 As she evolved professionally and personally, it was natural to expand her skills to encompass the growing movement of social impact entrepreneurship with projects from the streets of Miami to Venezuela and as far as Ethiopia. A 14 year veteran of her own start-up, Jewell’s been a practitioner of mindfulness long before Silicon Valley dubbed it the “new secret sauce” within the halls of Google and other forward-thinking, cutting edge multi-media entities. Bringing the tools of this mindfulness movement to Miami is part of her commitment through Venture League of the Americas, a consciousness-changing group of investors, start-ups and vendors who want to shift Miami’s “ego-system” into a viable “eco-system” which emphasizes increasing the trust, reciprocity and integrity within the innovation community of South Florida.

Suzanne spread her wings early from her native Michigan for undergrad to an M.A. from the Universidad de Sevilla, Espana, continuing her education with the University of California Berkeley Greater Good Science Center Awareness Training Institute, Stanford University’s Creative Insight Journey, is a trained hospice volunteer in the Dying Conscious movement and participates in the Unity Prayer Chaplains program.